The History of Askham Bryan College

Mentioned in the Domesday Book, the name Askham is thought to derive from the Anglo-Saxon “Asch” meaning an ash tree and “ham”, a homestead. Anglo-Saxon England was an agricultural society, with the population living in self-supporting villages. At some point a family or group of famers cleared sufficient land in Askham Bryan to grow their arable crops (c. 480-960 acres).

Meadows were vital to medieval agriculture, valued higher than arable land since hay was the only fodder crop available to take animals through the Winter. It is thought that the Ings, to the South East of the village towards Askham Bog, is the most likely location for the 3 acres of meadow recorded in the Domesday survey.

The College was built adjacent to the village on the Ainsty Ridge in 1938 on the south facing slopes.

Due to its long history, today’s Askham Bryan College has had a number of different names.

The original proposal for a land-based college located in Askham Bryan (the Yorkshire Agricultural Institute) was made in 1934.

Two years later the first foundation stone was laid and between 1936-39 construction was completed of the Main Building and Dairy Block (now used as the Learning Resources Centre).

The origins of the horticulture department can be traced to a decision in 1933 to move the work conducted by Leeds University at the Osgodby Fruit Station near Selby, to Askham. Originally it was intended to plant the fruit in Field No 103, the front field on an ideal south facing slope, but when it was realised in 1935 that money was likely to be made available to build the Institute, the fruit was located over the ridge to the present site of the horticulture department, leaving Field 103 free for construction of the main building and the entrance gates and front drive.

When war broke out in September 1939, the Institute had not quite been completed. However, a request from the Ministry of Agriculture was received later that month, that the facility should be used for the training of land girls.

The Women’s Land Army was a mobile, agricultural labour force of women specially recruited in both world wars to assist in increasing the production of home-grown food.

Recruits received four weeks of training in the skills needed to produce essential food supplies for Britain. They learned the techniques of market gardening, how to care for and milk cows, both by hand and machine, and how to grow and harvest field crops and animal fodder. These town dwellers were then found jobs on farms throughout the county and beyond.

By the end of October 1939, 30 land girls arrived (20 from West Riding and 10 from the East and North). Much of Westfield and East Barrow farms were utilised for food production, the market garden glasshouses and orchard continued in production throughout partly staffed by the land girls.

Between 1943-47 the Ministry’s National Institute of Agricultural Engineering (NIAE) moved to temporary quarters at Askham Bryan. Machine workshops were built behind the main building (determining the future site of the machinery department). Priority in the early 1940s was given to testing the development of new machinery and training to those involved as machinery instructors and members of War Agricultural Executive Committees.

The site was de-requisitioned in 1947, after the NIAE departed, and enrolled its first residential students, 40 students arrived for a two-term course in January 1948. Regular one-year courses in general Agriculture and Horticulture began in the September with 58 students, 2 studying horticulture and all male full-time residential cohort.

Mr JA Lindsay was appointed Principal in Sept 1948 and writing in the first prospectus said “Owing to the limited accommodation available”, admission was “at present”, limited to men only. The intention had always been that courses should be open for both sexes but it was not until 1968 that the college saw its first intake of full-time female students in 1964, onto a horticulture course.

Mr JA Lindsay emphasised that students should spend 50% of their time “out on the farm” receiving practical instruction and doing practical work. Smart dress was expected at all times with a collar and tie being required even when students were engaged on practical work.

1960S - THE START OF A MAJOR BUILDING PROGRAMME

A considerable building programme was planned to run over several years, beginning in 1964 with completion of Conference Hall, phase 1 of the machinery workshops, Arkendale hostel for 28 students, and conversion of the old Dairy Building into labs for applied science.

In 1965 Bishopdale hostel was added and in 1968 the teaching block and phase 2 of the machinery workshops were complete. Coverdale hostel also opened and the main lecture theatre with students union and bar.

The 1960s were years of considerable expansion for the horticulture department as the courses offered moved from an emphasis on commercial horticulture, to amenity horticulture, to meet the needs of a growing industry. The addition of “Horticulture” in the title, when the Institute was renamed the Askham Brayan College of Agriculture and Horticulture in 1967, bears witness to the new importance attached to the department.

During this period of major builds, the landscaping and planting was overseen by P.A. Hemsley, a tree expert from the Edinburgh Botanic Gardens, who had begun his career at Askham Bryan as a student. In 1978 he also took charge of the Museum Gardens in York, when the College won a contract to maintain the gardens until early 90’s.

In February 1974 the College received its first royal visit, by the Duchess of Kent.

In 1981 an HND course in agriculture was introduced. All supplementary courses had been phased out by 1979, and the advanced courses began to offer options.

L.C.G Gilling, Principal since 1957, retired in 1984. He had presided over the college’s growth from 70 to more than 250 student places, and had overseen the considerable building programme which made this expansion possible. He also pioneered the facilitation of three-year Ordinary and Higher National Diploma courses, developed to offer specialist skills and knowledge demanded by carers in land  and countryside management, as well as mainstream agriculture and horticulture.

The work of the college had also expanded to include supervision of part-time education at various rural centres.

For the first time in its history, the College was now able to offer a one year degree course to successful HND students. The BSC degree in Land Management and Technology was affiliated by The University of Leeds.

In 2001 the first HE animal management courses started with the College’s flagship 3-year BSc(Hons) programme first intake in 2006/07. The College was delighted to offer its first MSc programmes in 2018.

A new equestrian centre was opened in 2005 when horses re-joined the residential population at the College, the last farm horse having previously been sold in 1960.

The Animal Management Centre and Wildlife Park was opened as a public attraction and teaching facility. One of the largest build projects in the college’s history the £6.8 million facility, showcasing a two-storey animal management building featuring a range of world wildlife habitats and modern teaching facilities.

In February 2017 a £2.4m agricultural and engineering hub was opened to be the focus of practical studies for agricultural students. The agri-tech centre was built to provide a practical and innovative space for its students. The building lies at the heart of the College’s York campus, featuring lecture rooms with latest IT technology, farm information room and 900sqm double height workshop with specialist equipment. The building is formally known as the Lance Gilling Building, named after the College’s longest serving Principal (1954-1984) and leading agriculturalist.

An important milestone in the College’s history was marked by the opening of two facilities in 2021. £1.7m has been invested in a precision livestock facility (with teaching and learning space, a precision calf-rearing facility and beef grower unit) to enable the delivery of courses on sustainable and high welfare farming practices and allow students access to real-time data and a fully digitised approach to rearing beef animals.

Towards the end of the year, a £1m project to extend the College’s existing Learning Resources centre was completed. Teaching essential digital literacy skills to students, and upskilling the current land-based workforce in line with industry -emergent technologies, the space features a mixed-reality suite to enable students to access simulated environments to provide a richer more expansive learning experience.

When the College originally opened in 1948 it recruited 40 students but now the College has over 5000 enrolments in educational programmes from entry level provision to Masters Degrees.

An illustration of the new digital academy facility due to be opened during 2021/2022. 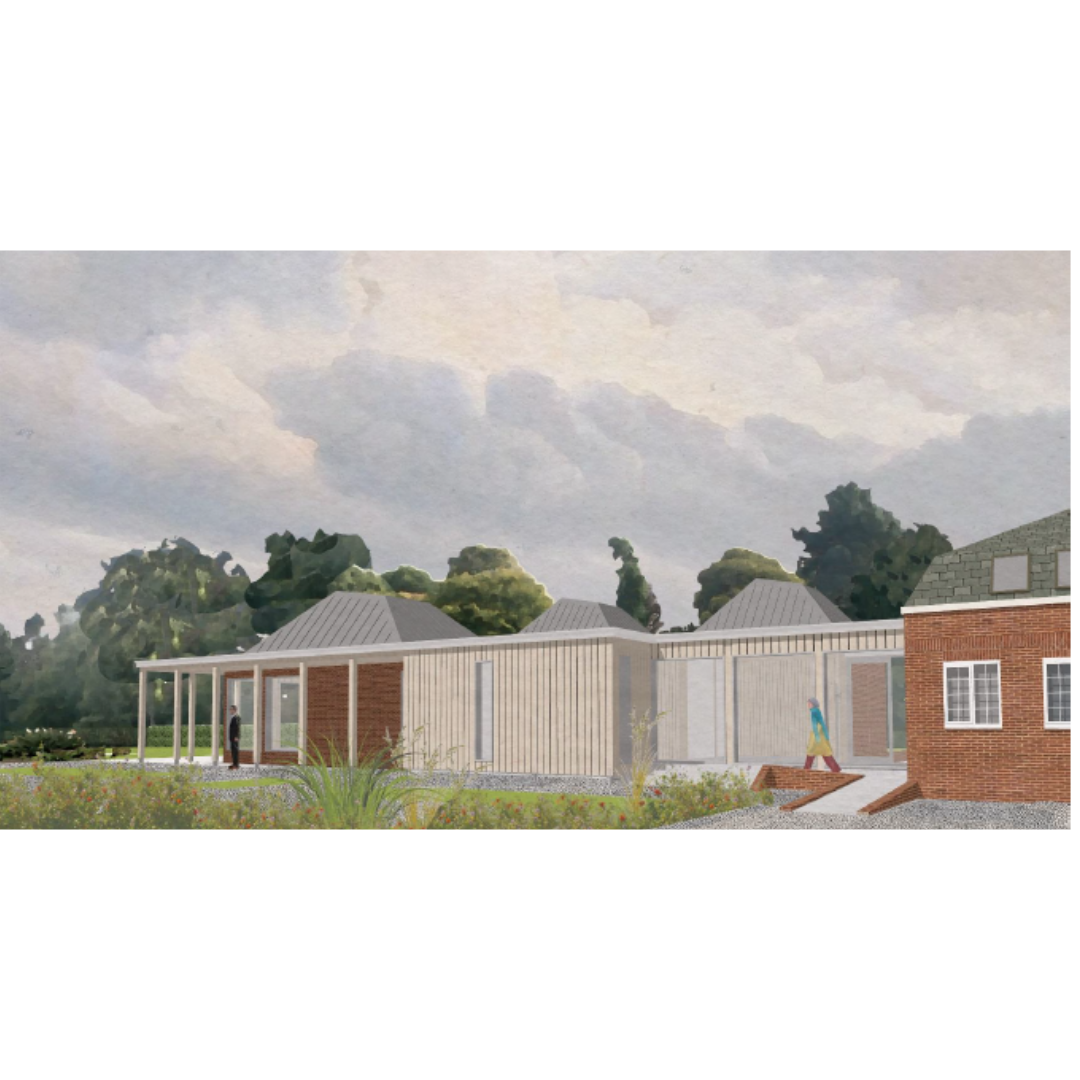 The College celebrates 80 years of providing a specialist education to our students.